What to Know About the New Infastructure Bill

We hope you're well and looking forward to some time with family and friends.
Before heading home for the holidays, let’s talk about what’s in the news — infrastructure, inflation, and taxes.
President Biden just signed his much-debated bipartisan infrastructure deal.

What does that mean for the economy?

In the short term, some of the infrastructure funding will go immediately toward clearing port and transportation bottlenecks, so that might help improve supply chain issues.1 Fingers crossed.

Though it could be years before we drive across a new bridge or highway funded by the bill, some of the maintenance funds could get used in spring construction blitzes.2

Since the job market is already tight, the economy isn't likely to see an immediate surge in hiring due to infrastructure spending; however, multiple reports suggest 800,000 new jobs could be added by 2030, though many of them will be temporary rather than long-term jobs.

Economists don't think inflation is likely to increase due to the slow pace of spending, though the deal is projected to add $256 billion to the federal budget deficit over the next 10 years.

Prices are up all over, and folks are understandably upset at paying more at the grocery store, gas station, and most everywhere else.
Many analysts hoped that data blips, supply chain clogs, and other pandemic-related disruptions were creating a temporary spike in inflation that would resolve soon.4

However, inflation has remained stubbornly high. 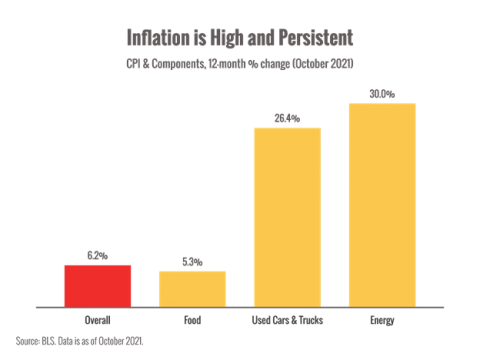 In the U.S., prices have increased 6.2% over the last 12 months — the biggest spike since November 1990.  And you can see in the chart that some categories measured by the Consumer Price Index (CPI) have soared by much more.5

Since the Fed's goal is to keep long-term inflation around 2% (and that's what we've experienced this century), folks are concerned that "temporary" inflation is lingering longer than we want.

So, are prices going to continue to rise in 2022?
That's likely, but how much, how fast, and for how long depend on a lot of global factors, including whether the Fed raises interest rates or takes other actions.

We’re keeping an eye on it.

That’s the question of the month on Capitol Hill as lawmakers debate the Build Back Better deal that could come with tax law changes.

We don’t know when (or if) the bill will be passed, but we’re watching closely, and we’ll keep you updated.

We’re wishing you and yours a relaxing Thanksgiving with great food, great fun, and great memories.

Last month, Chad surprised the Eagle Wealth team with a rather unusual “training”.

The Eagle Wealth team headed down to Unofficial Logging Co., our local hatchet tossing hall, to see if we could ‘hack’ it.   We enjoyed snacks, beverages, and played a few ax games.  This was the first time throwing an ax for all of us and as it turns out, learning a new skill together can be both hilarious and exciting.  We split off into two teams (Zombies vs Frankenstein) for some friendly competition.   We even learned a few trick shots to keep things interesting. 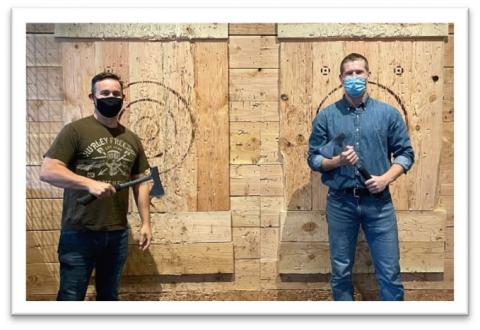