The Virus Becomes the Focus

On Friday afternoon, Federal Reserve Chair Jerome Powell stated that central bank officials were willing to “use our tools and act as appropriate to support the economy.”[i],[ii],[iii]

Strong Consumer Confidence, Plus a Boost for Incomes

A trio of economic indicators pertaining to U.S. households looked solid last week. The Conference Board’s Consumer Confidence Index notched consecutive months above 130 for the first time since July-August 2019, posting a 130.7 February mark. The University of Michigan’s final February Consumer Sentiment Index came in at 101.0, ticking up from a preliminary 100.9.

Friday, the Department of Commerce reported that Americans increased their personal spending by 0.2% in January, while personal incomes improved 0.6%.[iv],[v]

Buyers Have Flocked to New Homes

New home sales, according to the Census Bureau, improved 7.9% in January; the annualized pace of new home buying was the best seen since July 2007. Year-over-year, sales were up 18.6%. Housing market analysts cited a favorable economy and favorable weather as factors.[vi]

Right now, there is no forecast for how the coronavirus outbreak may affect consumer demand or supply chains. The impact may not be known for months. But remember, your investment strategy should reflect your risk tolerance, time horizon, and goals, and it also should take into consideration periods of market volatility. Fear is driving decisions in the financial markets. Nobody would blame you if this uncertainty gave you a bit of anxiety as well.

Friday: The Department of Labor presents its February employment report. 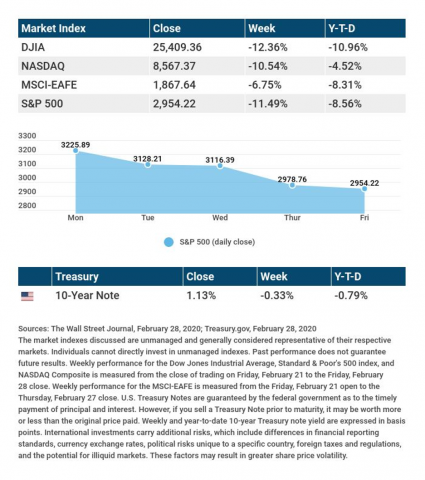