Stocks spent much of last week rebounding from a Monday drop that reflected nervousness about the U.S.-China trade fight. By Thursday’s closing bell, the S&P 500 had regained all its Monday losses – but it descended again on Friday.

Last Monday, stocks fell 3% in reaction to the overnight weakening of the Chinese yuan. A weaker yuan makes Chinese exports cheaper for buyers who pay for them in dollars.

Critics quickly accused China of manipulating its currency to strike back at the U.S. The federal government plans to impose tariffs on nearly all Chinese products next month, likely making those goods more expensive to American consumers; a weaker yuan could counter the effect of those import taxes.[iii],[iv]

Ninety percent of S&P 500 firms have now reported second-quarter results. Their collective sales and profits have surprised to the upside.

Stock market analytics firm FactSet says that overall earnings have beaten estimates by 5.7%. Seventy-five percent of firms have reported actual earnings per share surpassing estimates, which is better than the five-year average.[v]

We are seeing a significant bond rally this summer, even with interest rates at very low levels. (When bond prices rise, bond yields tend to fall.) At the moment, about a quarter of the global bond market is invested in government notes with negative interest rates. The 10-year Treasury stands in contrast. Friday, it was yielding 1.74%.[vi],[vii]

Friday: The initial August University of Michigan Consumer Sentiment Index presents the latest snapshot of household confidence in the economy. 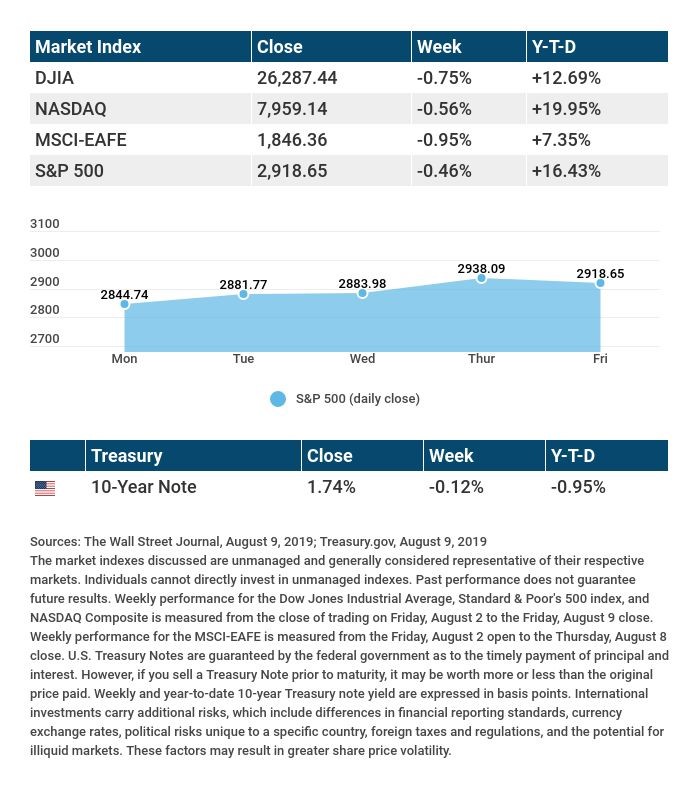