Stocks Ride Out a Choppy Week

Key Wall Street benchmarks were up and down last week – or rather down and then up. A Tuesday retreat was offset by a Friday rally spurred by the Department of Labor’s November jobs report.

These numbers do not indicate an economy cooling off. While they were influenced by the return of striking General Motors workers to their jobs, November hiring gains were spread across several categories.[iii]

Markets Might Wait Well into 2020 for a China Trade Deal

The U.S.-China trade dispute has gone on for 21 months. Wall Street would like to see a new phase-one trade agreement signed this month, but the timeline could lengthen. On Tuesday, President Trump said that he was considering the option of waiting until after the 2020 election to sign off on such a pact.

On December 15, the U.S. is slated to impose a new set of tariffs on around $160 billion of Chinese products. Tech companies are eyeing this date with concern.[iv]

Holiday shopping is critical to the economy, accounting for about 20% of annual retail sales. This year’s calendar, however, does not favor retailers. The 2019 holiday shopping season is six days shorter than last year’s, as Thanksgiving fell on November 28. So, expect traders to keep close tabs on the pace of holiday spending, even with consumer confidence indices and stock benchmarks at high levels.[v] 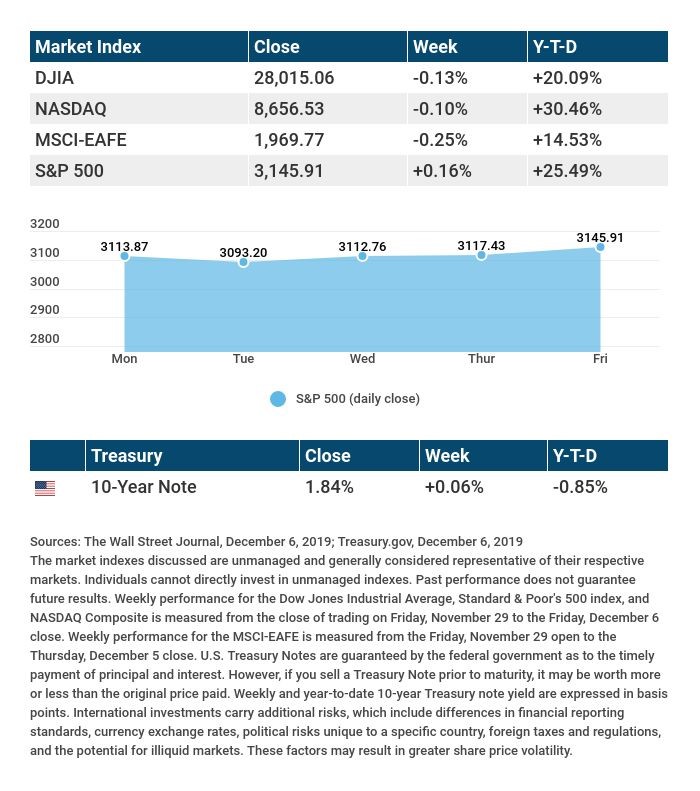