On July 3, the S&P posted its latest record close: 2,995.82. In other news, the Department of Labor said that the economy added 224,000 net new jobs in June, far more than the 160,000 projected by analysts in a Bloomberg poll. The headline jobless rate ticked up 0.1% to 3.7% in June; the U-6 rate, including the underemployed, also rose 0.1% to 7.2%. Finally, the Office of the U.S. Trade Representative said that the federal government plans to levy new tariffs on $4 billion of food and beverages coming from the European Union.[v],[vi],[vii]

Monday, July 15 will mark the start of the next earnings season. Money-center banks report first, followed by companies from a variety of industries. As Wall Street gets ready for their results, we will take a moment to recap Q2 index performance and the quarter’s two biggest news developments.

The Fed Hinted at a Shift in Monetary Policy

The central bank’s June statement took out a reference about being “patient” on borrowing costs and noted that Fed policymakers would “act as appropriate” to try and sustain economic growth. The latest dot-plot, showing the opinions of Fed officials about where interest rates might be in the near future, showed nothing like consensus.[x]

In May, the U.S. and China announced they would hike tariffs on each other’s exports during the quarter. Formal trade negotiations broke down for six weeks. On June 29, President Trump announced at the Group of 20 summit in Japan that talks would soon resume and that the U.S. would hold off on tariffs slated for another $300 billion in Chinese goods.[xi],[xii]

As the quarter gets underway, traders are wondering if an interest rate adjustment and a U.S.-China trade deal are in store for the summer; there is also some ambiguity about the economy’s momentum. Investors will have plenty to consider in the coming weeks.

Wednesday: Fed Chair Powell testifies on monetary policy in Congress, and the Fed also releases the minutes from its June meeting. 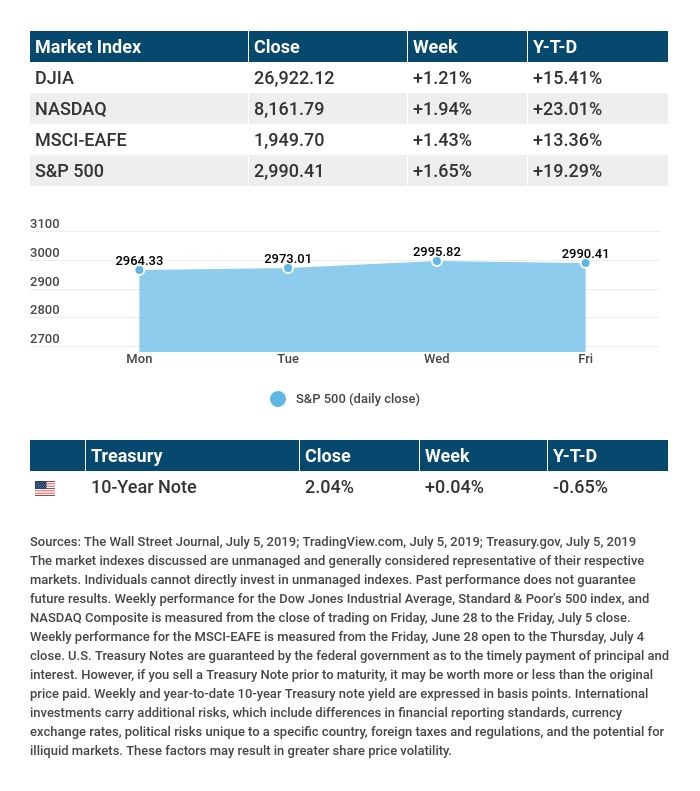