Last week, investors assessed earnings and the initial estimate of second-quarter economic growth, while awaiting the Federal Reserve’s next announcement about interest rates.

Analysts surveyed by Dow Jones Newswires had forecast 2.0% Gross Domestic Product (GDP) for the second quarter. The actual estimate, announced Friday by the Bureau of Economic Analysis, was slightly better at 2.1%.[iii]

While this is the poorest quarterly GDP number since the opening quarter of 2017, the decline in GDP largely reflects a decrease in business investment. Consumer spending improved 4.3% in Q2, and government spending rose 5.0%, which was the biggest quarterly gain in a decade.[iv]

This renewed effort to forge a bilateral trade pact could go on for some time. Secretary of the Treasury Steven Mnuchin, who is part of the U.S. delegation, told reporters last week that it would likely take “a few more meetings” before any kind of accord can be considered.[v]

Wednesday at about 2:00pm EST, the Federal Reserve is scheduled to conclude its July meeting. Wall Street is eager to see what the Fed will do with interest rates. The question is whether traders have priced in expectations of a cut and how they may react if no cut comes.

Thursday: The latest report on American manufacturing from the Institute for Supply Management.

Friday: July jobs data from the Department of Labor, and the University of Michigan’s final July Consumer Sentiment Index, measuring household confidence in the economy. 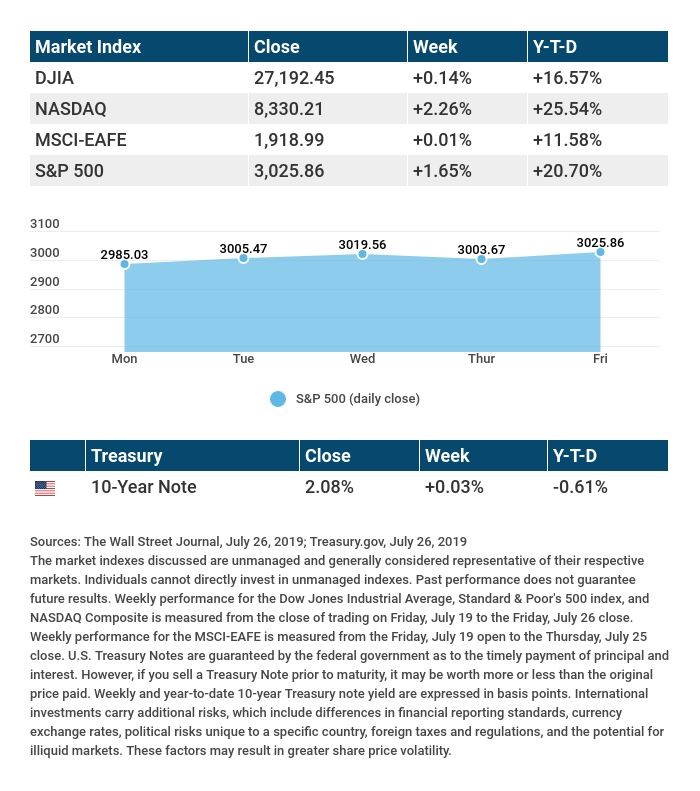