Last week, the Federal Reserve cut interest rates for the first time in more than a decade, in line with Wall Street’s expectations. Ironically, stocks had their worst week of 2019.

On Wednesday, the central bank reduced the federal funds rate by 0.25%. The latest Fed policy statement noted that “global developments” and “muted inflation” influenced the decision.

Addressing the media, Fed Chairman Jerome Powell described the cut as a “mid-cycle adjustment.” After that comment, Wednesday’s trading session turned volatile on the interpretation that the cut was a “one and done” move, instead of what might be the first in a series.[iv]

Shares also fell Thursday, after a White House tweet indicated that the U.S. would put a 10% tariff on another $300 billion of goods coming from China, effective September 1.

Practically speaking, this would mean a tariff on nearly all Chinese products arriving in America. So far, the announcement has not affected plans for trade delegates from both nations to continue negotiations in September.[v]

Payrolls expanded with 164,000 net new jobs in July, according to the Department of Labor. The headline jobless rate stayed at 3.7%; it has now been under 4% for 17 months. The U-6 jobless rate, which counts both underemployed and unemployed Americans, dipped to 7.0%, a level unseen since December 2000. 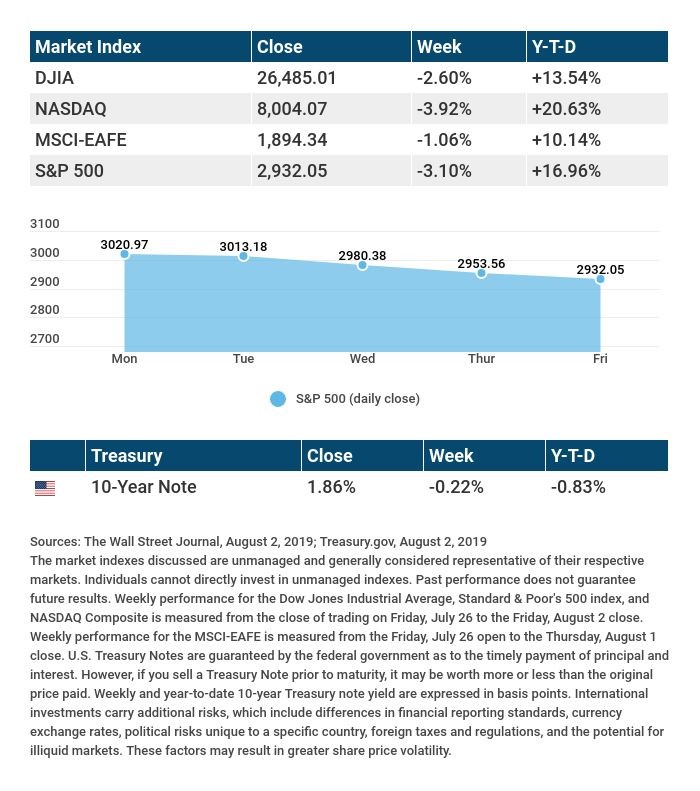