U.S. stock indices saw significant ups and downs last week, with traders looking for economic cues from Treasury yields and also developments in the tariff fight between the U.S. and China.

Attention on the Bond Market

Wednesday, the yield of the 2-year Treasury bond briefly exceeded that of the 10-year Treasury bond. When this circumstance occurs, it signals that institutional investors are less confident about the near-term economy. That view is not uniform. Asked whether the U.S. was on the verge of an economic slowdown, former Federal Reserve Chair Janet Yellen told Fox Business “the answer is most likely no,” noting that the economy “has enough strength” to avoid one.

Last week, the Office of the U.S. Trade Representative announced that about half the Chinese imports slated to be taxed with 10% tariffs starting September 1 would be exempt from such taxes until December 15.

The White House said that the reprieve was made with the upcoming holiday shopping season in mind, so that tariffs might have less impact on both retailers and consumers.[v]

Lower interest rates on bonds are now influencing mortgages. According to mortgage reseller Freddie Mac, the average interest rate on a conventional 30-year home loan was just 3.6% last week. That compares to 3.81% roughly a month ago (July 18).[vi]

30-year and 15-year fixed rate mortgages are conventional home loans generally featuring a limit of $484,350 ($726,525 in high-cost areas) that meet the lending requirements of Fannie Mae and Freddie Mac, but they are not mortgages guaranteed or insured by any government agency. Private mortgage insurance, or PMI, is required for any conventional loan with less than a 20% down payment.

Wednesday: The minutes of the July Federal Reserve meeting and the latest existing home sales data from the National Association of Realtors. 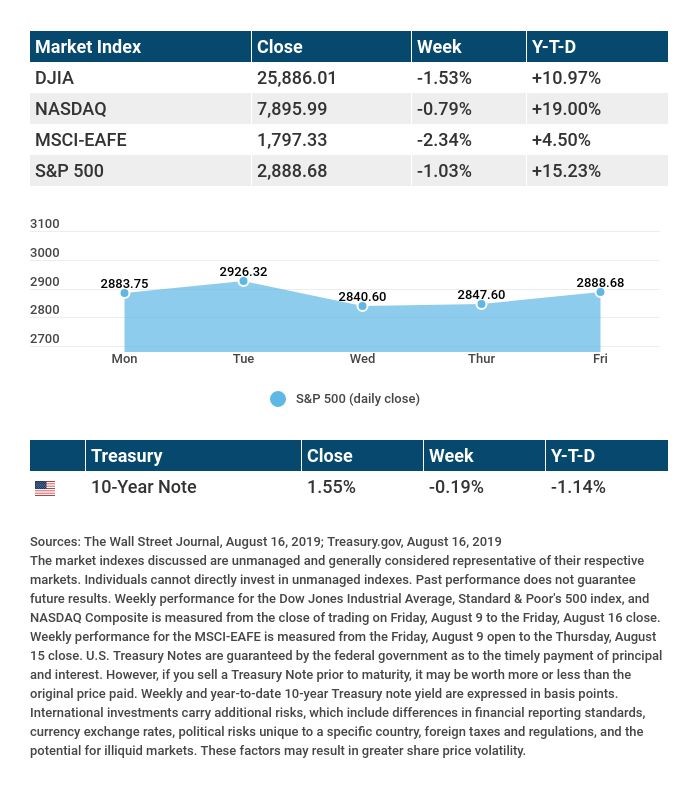