The Dow Jones Industrial Average, Nasdaq Composite, S&P 500, and MSCI EAFE all ended the week with gains. Blue chips led the way, as the Dow added 1.22%. The Nasdaq improved 1.06%; the S&P, 0.85%. The EAFE, tracking developed stock markets away from North America, was up 0.76%. The Dow recorded its third straight weekly gain; the S&P, its fifth.[i],[ii],[iii]

Will Tariffs Phase Out or Remain?

Thursday, a spokesman for China’s commerce ministry said that U.S. and Chinese trade representatives had “agreed to remove” existing tariffs in “phases,” while working toward a new trade deal.

On Friday morning, President Trump told the media that he had not agreed to any such condition. President Trump and Chinese President Xi Jinping are still expected to sign off on “phase one” of a new bilateral trade agreement.[iv]

As most U.S. companies provide services rather than manufacture products, this news is encouraging and suggests more momentum in that sector.[v]

Monday is Veterans Day; the stock market will be open, but the bond market, plus all federal government offices, will be closed. 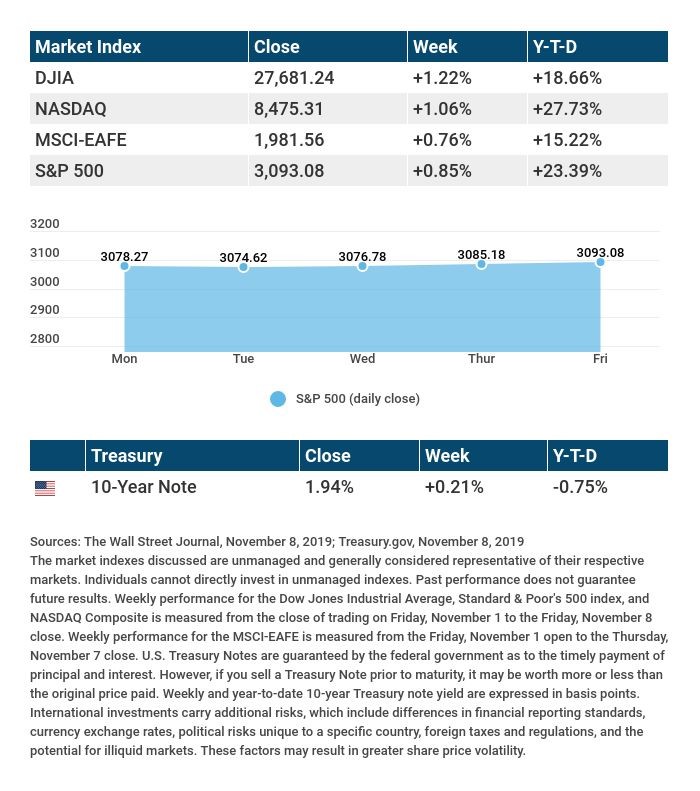