Friday morning, China’s finance ministry stated it would levy import taxes of 5-10% on an additional $75 billion of American imports. One set of tariffs is slated to start September 1, targeting U.S. crops, meats, and seafood. A second set, effective December 15, will put tariffs on U.S.-made cars and car parts. In total, these taxes are scheduled for more than 5,000 American products.

Friday evening, the White House announced two rounds of 5% increases on existing U.S. tariffs on Chinese goods, to be successively implemented on September 1 and October 1.[iii],[iv]

Friday, Jerome Powell delivered an address on monetary policy at the Kansas City Fed’s annual Jackson Hole symposium. He noted that the global economy currently presented a “complex, turbulent picture,” and added that the Fed was “carefully watching developments” and would “act as appropriate.”

Investors wonder if the central bank will consider another rate cut at its September meeting. Comments from other Fed officials at Jackson Hole did not indicate a consensus on that matter.[v]

The Conference Board, the business research group known for its monthly Consumer Confidence Index, also publishes a monthly Leading Economic Indicator (LEI) Index. The Conference Board LEI provides a forward-looking analysis of the health of the business cycle, looking at ten factors ranging from consumer expectations to stock prices to construction activity.

In July, the LEI rose 0.5%, following 0.1% descents in May and June. This sudden increase offers optimism at a time when investors are wondering about the momentum of the economy.[vi]

Bond prices have risen around the world, leading to lower bond yields. In some instances, yields have turned negative. While the yield on the 10-year Treasury has also declined, it is still above 1.5%, notably exceeding the yields of similar-duration bonds in France, Germany, Spain, and the United Kingdom.[vii] 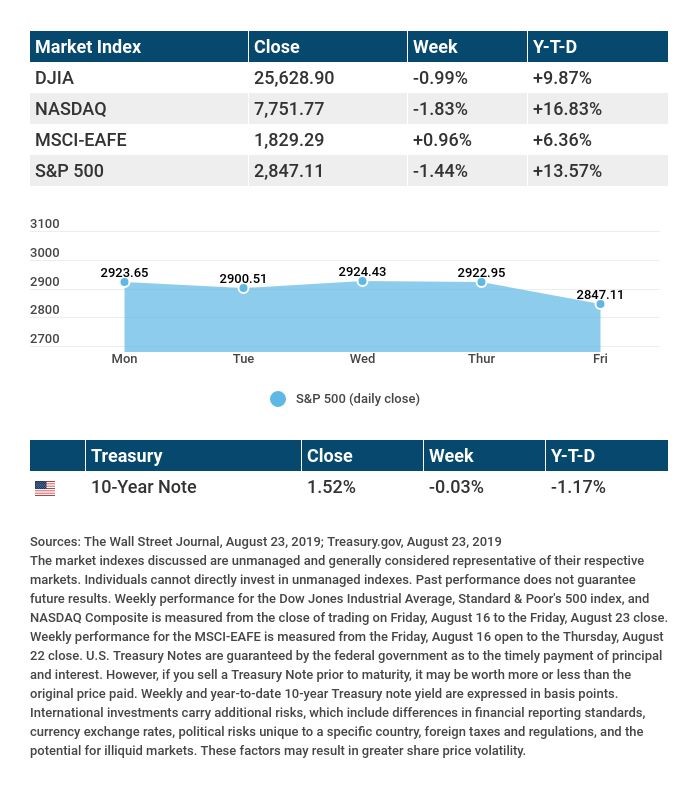