Big Gains for the Major Indices

Stocks rallied during a week in which Wall Street was buffeted by headlines. The S&P 500 rose 4.41%. The Nasdaq Composite and Dow Jones Industrial Average respectively added 3.88% and 4.71%. The MSCI EAFE index of overseas stocks improved 2.02% across five days.[i],[ii]

Following a mixed Monday, the market jumped Tuesday after dovish remarks from Federal Reserve Chairman Jerome Powell. Breaking out of a 6-week losing streak, the Dow had its best week since November.[iii]

Speaking at the Federal Reserve Bank of Chicago, the Fed chair stated that central bank officials “will act as appropriate to sustain the expansion” of the economy in the face of “recent developments involving trade negotiations and other matters.”[iv]

The next 2-day Fed policy meeting ends on June 19, with a press conference to follow.[v]

Employers added just 75,000 net new jobs to their payrolls in May, according to the Department of Labor. Economists polled by Reuters thought that the gain would be 185,000. The main unemployment rate held at 3.6% last month; the U-6 rate, which includes the underemployed and those who have stopped looking for work, fell 0.2% to 7.1%.[vi]

To some analysts, the weak May hiring number hinted at private-sector concern over tariffs. To others, it simply signified the possibility that the economy may be at or near full employment.[vii]

While breaking news does often merit investor attention, refrain from letting the headlines of the moment prompt you into emotional decisions. Brace yourself for further headlines that may drive market volatility because new developments are arriving quickly in the financial markets.

Wednesday: The latest Consumer Price Index, showing the rate of inflation in May and across the past 12 months. 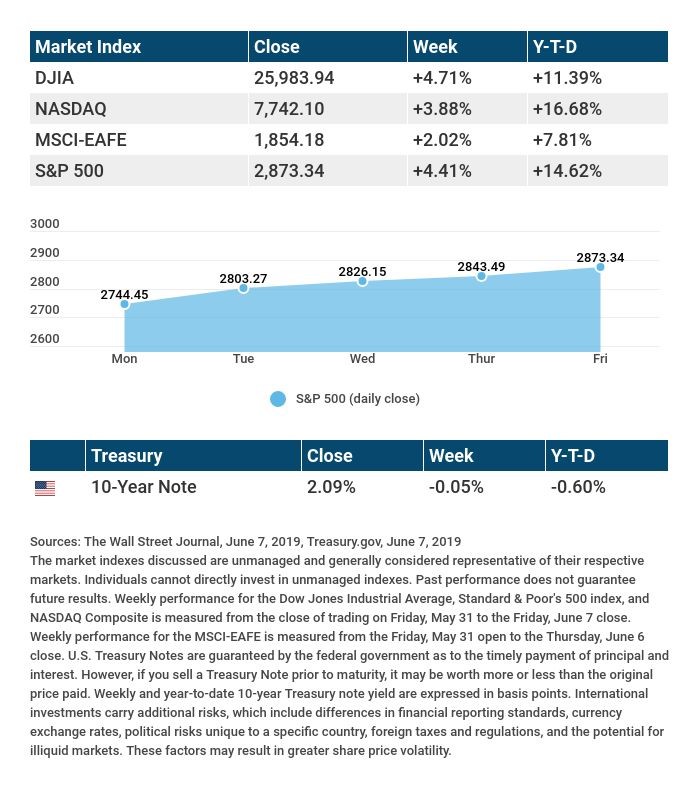